aba+d is a young small practice run and opperated by Andrew Bruce offering a professional, personalised service committed to fine tuning a project around the client's specific requirements.

Find out more about us and allow us to partner you in your next project. 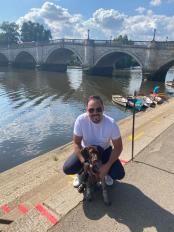 Andrew studied both his Honours degree in Architecture and a Diploma in Architecture and Urban Design at Edinburgh College of Art. Since graduating in 2008 Andrew has gained a wealth of experience and knowledge working in a number of practices in Edinburgh on domestic projects of varying scales and budgets before moving down to London and setting up aba+d.

Andrew honed his skills in the domestic market working for a small Edinburgh based practice called KRA where he managed a number of small projects in the Edinburgh area from conception right through to completion covering all aspects from design through planning, building regulations, tender submission and construction packages.

He then moved on to a medium sized multi-disciplinary practice called GLM specialising in conservation architecture. Working alongside building surveyors and architects on historic, architecturally sensitive buildings throughout Scotland in both the domestic and commercial developments he experienced the difficulties facing a client when considering expanding their Grade A listed building. Working closely with the clients, planning officers, contractors and sub-contractors, a solution to the problem was never far away.

Since arriving in London Andrew has built up a considerable network of contacts within the housing and building industry and can always recommend a suitable professional to help ease the progress of your desired project.

Away from work, Andrew has a vast array of interests which keep his spare time occupied, from being a keen follower of Rugby, a keen Harlequins fan and season ticket holder, to motorsport such as MotoGP, F1 and WRC. He regularly enjoys an active lifestyle in the form of running, cycling and long river walks with his four legged friend Otis. With any spare time, Andrew enjoys tinkering away on bicycles in his garage and spending valuable time with family and friends.

Or use our contact form to enquire about our services or with any queries or comments.  We will respond as soon as we can!

Work is really flying along at a loft Conversion project in Twickenham TW2. Seen from the River Crane walk it's in a prime spot to showcase our work.  Hopefully this may lead to further work along this stretch.

Further updates as and when we get them.

Wandsworth Council approve scheme for semi-detached house inbetween the commons. Work is due to start March 2022

After many months delay, Guildford Council approve scheme for extensive renovations and extensions to small bungalow in West Horsley.